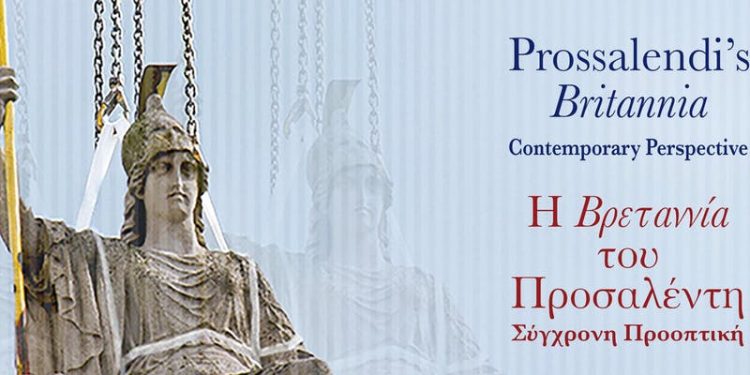 CORFU.- As it is well known, George IV, when he was Prince Regent of the United Kingdom, founded the Order of St Michael and St George in Corfu and in Malta on 28 April 1818, two hundred years ago. This forms part of Corfu’s history and belongs to its heritage. To celebrate the Order’s bicentenary, the Corfu Heritage Foundation is organising the Corfu Festival 2018, which is to include a series of cultural events encompassing literature, music, visual arts and sports.

This Festival is taking place under the auspices of the British Embassy, Athens, the Hellenic Republic’s Ministries of Culture and Tourism, and the Municipality of Corfu, between 7 July and 30 September 2018.

Finally, Professors Harris Kondosphyris, School of Fine Arts of the University of Western Macedonia in Florina, and Panagiotis Kyratsis, Technological Educational Institute of Western Macedonia in Kozani, with their students will present a new sculpture, relating to Prossalendi’s Britannia, to be submitted to the Central Archaeological Council with the prospect of it being displayed either temporarily or permanently in the place of the missing sculpture on the Palace’s façade.

The Contemporary Perspective of the “Prossalendi’s Britannia” exhibition will be presented at the Ionian Academy, Corfu, in the period 1 – 29 September 2018. – Eventbrite 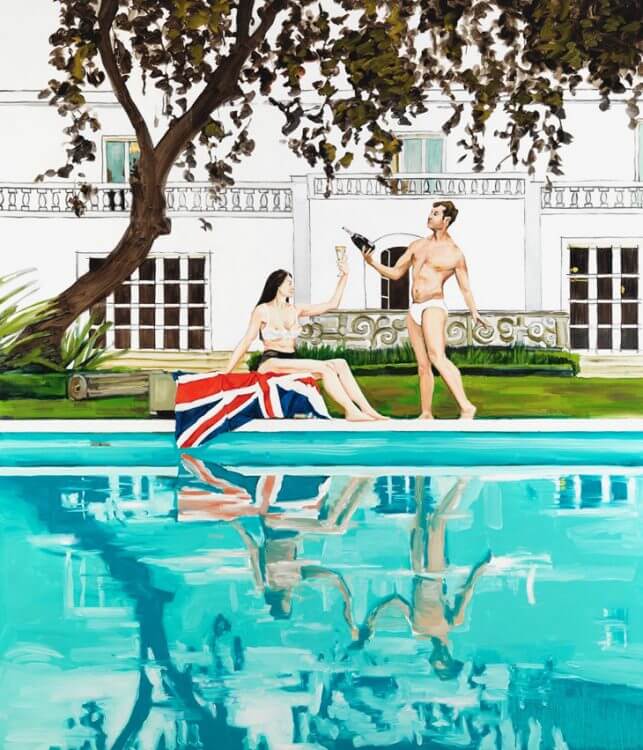 The work of Stella Kapezanou presents the elements of a pure and unapologetic painting. Responding to Prossalendi’s Britannia she renders a contemporary version of her, in which the symbolisms of the past have turned into modern depictions. As the title of the work implies, we find ourselves in Brittany’s back yard. Witnessing a rather private moment, we see her sitting on the Union Jack’s flag-towel, passively holding a glass, a substitute for the trident, being served champagne by a youthful man, who resembles the classical prototypes. A stone pillar, very much like a third presence in the party, lies collapsed, hidden, like ruins of the ideal. There is a sense of ambiguity coming from the surrounding elements of the background, which seem to be acquiring an entity of their own. Grand yet simple, the villa appears deliberately defective, forgotten in a past time, so as to turn the viewer’s attention to what is taking place in its foreground. The offer and acceptance of the man’s ‘precious’ liquid is reflected on the surface of the pool, as an indication of the semantic and temporal fluidity in all things human. The almost-naked bodies are associated with the simplicity of the villa and the naturalness of the surrounding vegetation, altogether, innocent and fragile, compared with the spiritual. Throughout the work, there is a dominant repetition of a dual interpretative scheme, that of literalism and metaphor. This depiction seems very realistic and fake at the same time. It gives us the feeling of a recovered paradise, where power and recognition, have led people to a kind of eudaimonia that hypnotises or awakes through its exaggeration. The artist’s purpose is not to comment on the present image of Britain, but to present a personal observation associated with the typical depiction of Prossalendi’s Britanniaand let the viewers exercise a social critique through self-reflection.

Stella Kapezanou was born in Athens. She studied painting in the Athens School of Fine Arts and won Honorary Scholarship by the Greek National Scholarships Foundation for being at first place in ASFA entrance. She continued her postgraduate studies in Chelsea College of Arts of London with a scholarship by Motoroil Hellas, where she won the Frank Bowling Scholarship. In London she has been awarded with the Clyde & Co Emerging Star Award, the Cass Art Prize 2018 and was a finalist for the Solo Show Award 2017, the Rise Art Prize 2018 and the ACS Studio Prize 2018. She works between Athens and London and her work has been showcased in Greece and abroad.

Thank you for subscribing.

we respect your privacy and take protecting it seriously